Showing posts from October, 2020
Show All

The Beautiful City In Italy 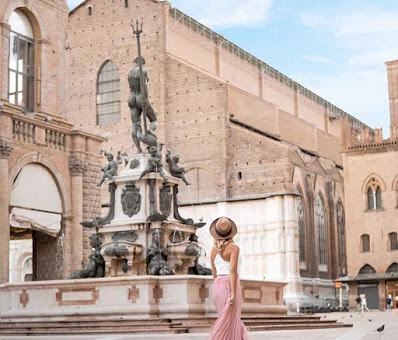 Bologna, Italy Bologna is one of the largest cities in Italy , and is certainly famous for its gastronomic tradition and its delicious local products that conquer everyone from the very first bite! ... But it is also at the centre of one of the most important railway hubs in Italy and home to the ancient University. Essential Bologna: One-Day Itinerary.  Before recommending where to eat in Bologna or discovering its secrets, visit the historic centre and start getting into the spirit of the city. Every weekend and public holiday the historic centre, more precisely the so-called " Zone T " consisting of Via Ugo Bassi, Via Rizzoli, Strada Maggiore and part of Via dell' Indipendenza, is closed to traffic, so it will be even more pleasant for you to walk around the streets and alleys of the centre. If you are visiting Bologna for the first time or have little time to discover it, here is the essential itinerary of the historic centre, the tour of the most central and histori
Post a Comment
Read more

Why people are running to these places after lock-down?

We May Travel Like Normal Again Many people who are travel freak are now running towards these destinations after lock-down. Nearly all the top tourist destinations will be back on the travel map soon. Some of them are already open for tourism and rest will be opening soon.  The government has issued strict guidelines under which several places are now open for tourism.  So, if you have been feeling stuck up at home for so long and willing to travel as a responsible citizen by following the COVID guidelines issued by the WHO and Indian Government then it will be some relief for you. However, old and young ones are still not advised to travel.  The recovery speed is much slower which is the need of the hour but it will serve as a great relief as per the current situation.  Goa Goa has been the most famous tourist destination for couples for ages and the most happening destination to travel with friends. Surrounded by a beautiful coastline and amazing beaches with peaceful sunrise and ro
Post a Comment
Location: Delhi, India
Read more

Prepared for the thrilling weekend getaway yet?

Thrilling Rishikesh Rishikesh is a beautiful city in the Uttrakhand state of India. This city lies in the foothills of the Himalayas and beside the holy river Ganga (known as the Ganges). Rishikesh is famous for Yoga and Meditation and also serves as a place to have adventure and offbeat activities. Rishikesh is mainly famous as a spiritual capital and it is a good mix of a modern and bygone era. Rishikesh is a perfect destination for weekend getaways with family and friends for the people from nearby places like Delhi, Noida, Gurgoan, Chandigarh and so on. Rishikesh lies in the proximity of 250-300 KM for all these places and one can reach within 5-6 hours of drive from any of the cities. This place offers lust green surroundings and the perfect view of the river Ganges which makes it a beautiful spot to spend the smooth evenings. One of the best activity to do is to stay in River Side Camps Riverside camps are best to spend a night or two just right beside the river. Hear the rustlin
Post a Comment
Location: Delhi, India
Read more

Weekend Gateway from Delhi Fill your weekend with an exciting trip to Rishikesh. Rishikesh is one the nearest hill station situated at a distance of around 240 KMs from New Delhi. It will take nearly 6 hrs of a smooth drive. The connecting roads are in good condition.  You will cross the adjoining cities like Ghaziabad, Muradnagar, Khatauli, Roorkee, Haridwar and then finally you will reach Rishikesh. You can make a stop for 2-3 hrs during your trip in Haridwar. Haridwar is considered as a holy city as per the Hindu devotees. You can visit the ghats (river banks) of river Ganga (known as the Ganges in English).  Continue your journey and reach Rishikesh and enjoy your evening on the riverside.  Pick up one of the best selling itineraries of 1N/2D or 2N/3D for Rishikesh, which is considered as one of the best weekend getaways for a fun-filled and thrilling weekend.  Package for Rishikesh 1N/2D or 2N/3D Package Inclusion: Day-1 Delhi to Rishikesh -Welcome Drink and refreshments. -Bone-fi
1 comment
Read more
More posts

Ziffy Travels
This is a travel profile owned by Ziffy Travels. We are a travel company based in the Delhi region of India. We are passionate about travelling and exploring the world. We have been assisting the travel enthusiast in making their travel plans excited and affordable by providing the right kind of information. These Travel Blogs are made to inspire the young travellers to Dream, Explore and Discover. With 06 + years of experience, we strive to provide the best knowledge and inspiration to travelers. This page is owned by Rubain Samuel (27) & Abhay Gupta (25) under the brand of Ziffy Travels, we both work on implementing new ideas and tackling challenges as a strong team to bring the best user experience.